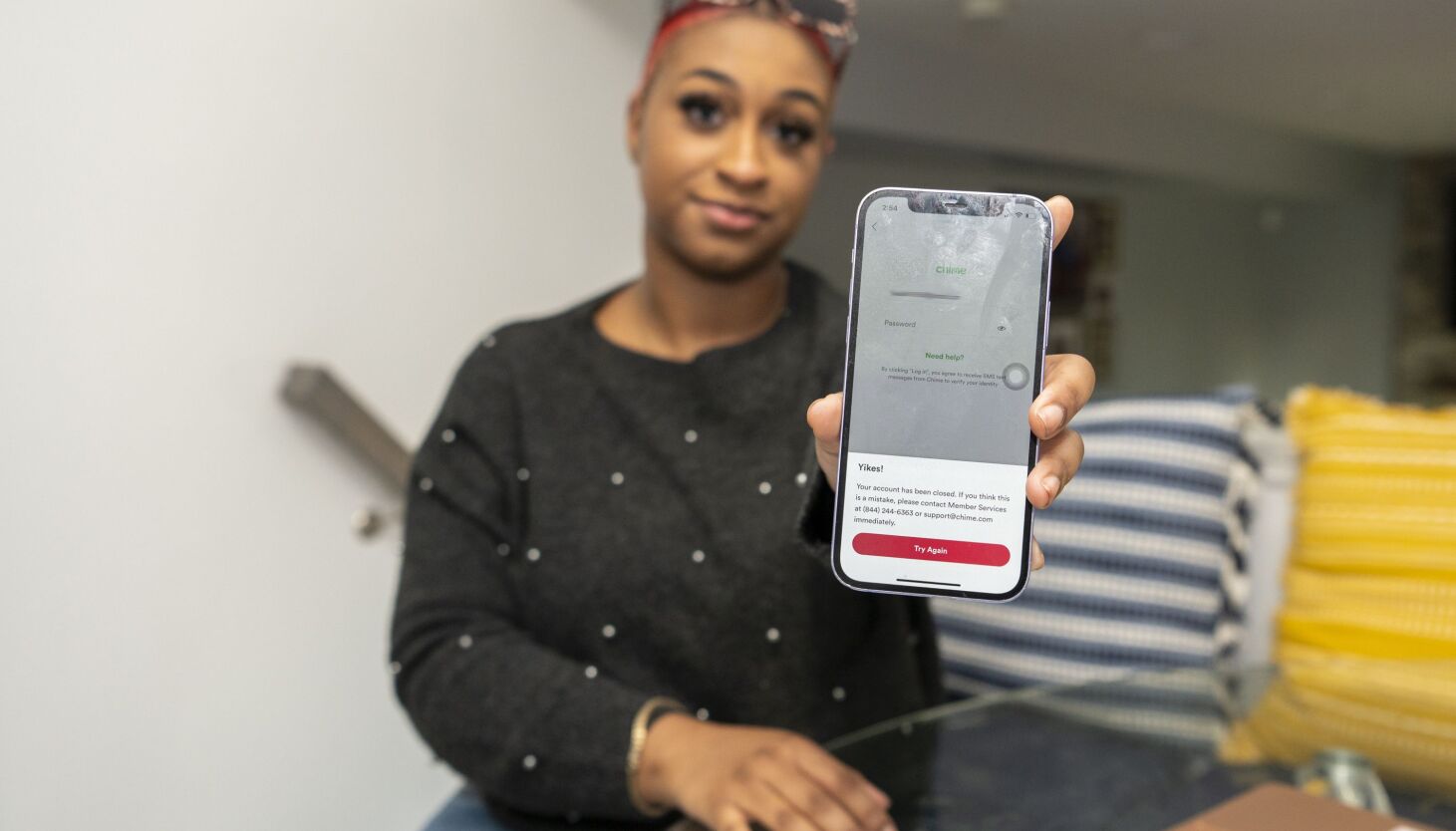 Kaitlin Henderson signed up with the popular banking app Chime for the reasons millions of users do: it’s easy to use and you can get your paychecks two days early.

What Henderson didn’t expect was for Chime to suddenly close her account — right before her next paycheck was due to arrive.

“I was baffled,” says Henderson, 24, a postal worker from suburban Worth who needed the money for her rent, car loan, cellphone bill and other expenses. “I thought it was a mistake.”

That was Oct. 11. She got a Chime representative on the phone and was told it could take up to 30 days to get her funds, she says. And she couldn’t get a straight answer about why the account was shut down.

“He said, ‘I can’t find an explicit reason.’ He said I wasn’t using Chime according to their policy, or something like that. I was like, what does that mean?”

Henderson eventually got her paycheck — after it went back to her payroll provider and then to her workplace — but she’s one of hundreds of consumers nationwide who have complained to regulators or griped on social media about having their Chime accounts suddenly closed or being unable to access their funds.

Since 2020, more than 3,500 complaints have been filed about San Francisco-based Chime Financial Inc. with the federal Consumer Financial Protection Bureau about closed accounts, unauthorized charges or other issues. Most are marked “closed with explanation,” meaning the company resolved them privately with the customer.

Chime offers no-fee mobile banking services to millions of people through Visa debit or credit cards. It touts its accessibility to people who have traditionally felt unwelcome at big banks, and it protects against overdraft fees through its tip-based “SpotMe” feature. Chime makes money on those tips and by collecting a small portion of interchange fees on card transactions.

Unlike traditional bank accounts, fintech apps like Chime exist in a gray area of financial regulation — one that many consumer advocates believe needs closer attention. These “neobanks” or “non-banks” don’t hold their customers’ deposits; rather they act as a middleman between the customer and the app’s partner bank.

Some Chime customers who have complained about sudden account closures were shocked to hear that it could take up to a month to get their money back.

Anthony Wilson, a 23-year-old college student, worried about paying his rent, phone, transportation and food when Chime suddenly shut down his account Sept. 26.

“Thankfully, I have roommates. If I had been living on my own, I’d be homeless,” says Wilson, of Baltimore, who filed complaints with federal and state authorities and contacted a Chicago Sun-Times reporter after seeing an earlier story about Chime.

The Sun-Times asked Chime about Wilson’s missing money. Over the next two weeks, the company located $20.95 from a gig work deposit and then $319.30 from an airline refund and finally sent Wilson a check for $340.25. The check was dated Nov. 9, which was 45 days after the firm closed his account.

“No warning. It’s just immediate,” says Wilson, who in addition to his college studies works part-time on political campaigns and in social media management.

As for Henderson, when the Sun-Times asked Chime about her closed account, the company initially said it was “confident it made the correct decision.” When pressed again to investigate, Chime emailed Henderson on Nov. 9 to say it owed her $50 for an earlier unauthorized transaction that Henderson had disputed.

A California resident, Ajayi was at a store in Mexico City when she realized her Chime card wasn’t working. Worse, she was scheduled for emergency dental surgery that day for an infected root canal. She immediately contacted Chime, to no avail.

“They cut off my source of funds knowing that I was in a foreign city and needed emergency surgery,” Ajayi says.

Ajayi, 36, who does brand consulting and also organizes mental health and wellness events, says she still hasn’t gotten an accounting of her funds more than 50 days later, and she can’t see her balance because she’s shut out of the app.

She has filed complaints with the Consumer Financial Protection Bureau, two state attorneys general and the nonprofit Better Business Bureau and has posted about it on social media.

Chime says it needs documents to prove Ajayi’s identity before it can address her complaints, but Ajayi says she provided those in October. She says that when she asked for a manager, a Chime employee hung up on her.

“This is so insane,” Ajayi says. “I feel like I’ve gone through every avenue and am still getting ignored by them.”

In an emailed statement, a Chime spokeswoman said: “… we have a vested interest in maintaining the trust and loyalty of our members and take this responsibility very seriously. In line with our ongoing commitment to financial security and member safety … we and our partner banks have the responsibility to close accounts if we have found account usage is in violation of our terms of service.”

Chime’s user agreement says it can “terminate, limit or suspend your access to or use of the Chime Services at any time and for any reason or no reason.”

Carla Sanchez-Adams, an attorney with the nonprofit National Consumer Law Center, says fintech apps’ partner banks have a duty under “know your customer” rules to guard against money laundering or other suspicious activity.

But account closures also could be triggered by a lot of cash transactions — which could be the case for workers who depend on tips.

Sanchez-Adams says consumers who believe a closure is unfair should try to demand their money back under the federal Electronic Fund Transfer Act, which requires banks to investigate disputes and report back to the customer within 10 business days.

She urges anyone having a problem to complain to the Consumer Financial Protection Bureau, not only to get help but to shed light on larger marketplace issues.