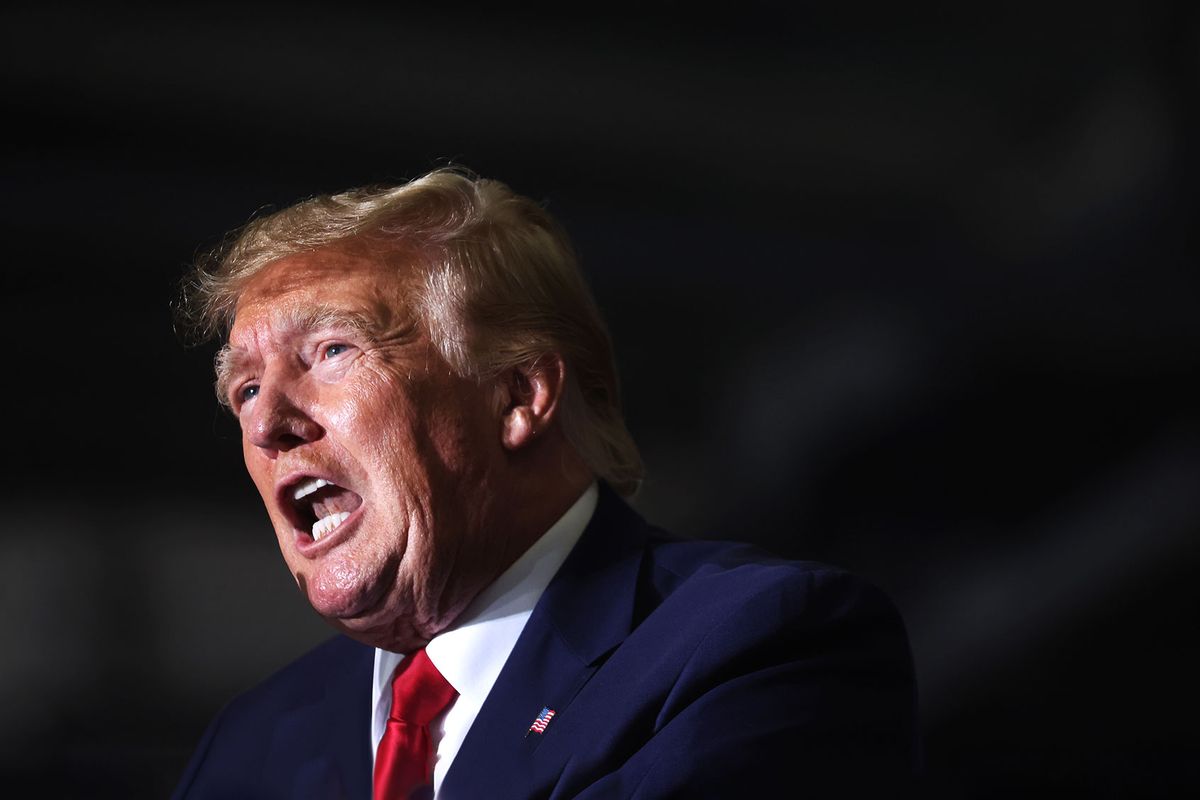 When George W. Bush announced that the United States had begun military action in Afghanistan on October 7, 2001, in retaliation for the 9/11 attacks orchestrated by al-Qaeda, he emphasized that the mission would also focus on providing humanitarian aid to the citizens of Afghanistan. “The oppressed people of Afghanistan will know the generosity of America and our allies,” he explained. “As we strike military targets, we will also drop food, medicine, and supplies.” The hypocrisy of a military strike framed as a humanitarian mission was on full display. For those of us who could immediately see through Bush’s hubris and his malignant American exceptionalism, the global war on terror epitomized the toxic nature of America’s culture of political hypocrisy.

It all seems quaint now.

Today we live in a world where chanting “lock her up” at Hillary Clinton for her handling of sensitive documents runs in tandem with outrage over an FBI seizure of classified documents as “un-American;” where unsubstantiated concerns over election fraud are best handled by attempting to overthrow the democratic process; where you chant “Blue Lives Matter” except during the Jan. 6 insurrection or when you attack the FBI; where invoking the Fifth amendment means a person is definitely guilty, except when you do it; where you call for bipartisan unity on one day and then stoke party division the next.

It’s actually kind of exhausting to try to list even the best highlights of Trump-era hypocrisy. As columnist Don Kahle writes, since the election of Trump, “GOP hypocrisy has become strategic.”

For some scholars, the Bush-style hypocrisy of the War on Terror is considered indispensable for the functioning of the world order. In fact, University of Cambridge professor David Runciman argues that politics isn’t possible without hypocrisy. For Machiavelli expert Ruth Grant, hypocrisy is essential to politics because a political life and a moral life are simply incompatible.

For others, hypocrisy threatens democracy because, as political science professor Austin Sharat puts it, hypocrisy “erodes trust and breeds cynicism.” For Sharat, Trump’s extreme and excessive hypocrisy poses a danger to the future of U.S. democracy because he has normalized it and, thus far, not been held accountable for it: “He has been a master of saying one thing and doing another. He has held up others to ridicule and then done the very things for which he shamed them.”

But that’s the thing. Whether or not you justify hypocrisy in politics, you have to admit that Trump-style hypocrisy is entirely different from previous examples. Sure, Thomas Jefferson wrote “all men are created equal” while unashamedly owning slaves. Lyndon Johnson said “we will seek no wider war” in reference to Vietnam and then did just that. Richard Nixon said “I am not a crook” when he was. Bill Clinton stated he hadn’t had sex with Monica Lewinsky when he had. But not one of the above examples of hypocritical presidents comes even remotely close to the hypocrisy of Trump.

Trump hasn’t just been a hyper-hypocrite. He hasn’t just mastered it; he has redefined the very meaning of it. Part of this shift lies in the fact that Trump may be the chief hypocrite, but every single one of his political allies and supporters is one too. You literally cannot support Trump or work alongside him and not be a hypocrite. In fact, if there is one recognizable element of the Trump party platform it is collective, weaponized hypocrisy. Without the hypocrisy, there literally is nothing else left.

Before we decide what to do about the new turn in political hypocrisy, we first have to understand it. Here are four key changes to keep in mind.

To say that the hypocrisy of Trump and his supporters is flagrant, shameless and extreme is to state the obvious.

In April 2017, Chauncey Devega wrote an essay for Salon in which he called Trump’s hypocrisy “flagrant.” The trouble is that when you used a word like “flagrant” to describe excess Trumpist behavior in 2017, you ran out of effective adjectives by 2022.

But the in-your-face style of Trumpist hypocrisy isn’t just limited to the hypocrite-in-chief. Perhaps there is no better example of the mass approach to Trumpist hypocrisy than its contradictions over health care. One day, pro-Trump Republicans are freaking out over needing to wear a mask during a pandemic; the next they are mandating control over women’s health. One ad targeting the hypocrisy of the “pro-life” position pointed out that Republicans only care about policing women’s bodies, not supporting them or their children.

So, we have both a spate of inconsistencies and a mass movement practicing them, but the additional in-your-face feature of Trumpist hypocrisy is the lack of shame. Think, for example, of all of those Trump nominated members of the Supreme Court who blatantly misled the public during their confirmation hearings about their position on Roe v. Wade, but also showed zero remorse, embarrassment, or even concern that doing so was not just hypocritical; it was deliberately deceptive.

Trumpist hypocrisy is just there all the time, in your face, and proudly on display.

Here’s where it gets really weird, because while it is on display, openly, all the time; it is also invisible. The difference is that some of us see it and some of us can’t.

Henry Farrell and Martha Finnemore argued in a 2017 essay for Foreign Affair that it was a mistake to consider Trump a hypocrite. “Trump’s No Hypocrite,” they claimed. Rather, they described him as inconsistent rather than hypocritical. “Hypocrisy requires a minimal degree of self-awareness,” they argued, as well as “clear understanding of both one’s own interests and of public norms.” Their point was that Trump simply couldn’t even “recognize” his hypocritical behavior, which meant he wasn’t actually a true hypocrite.

Here’s the catch — and it explains why some of us see the hypocrisy and why those who practice it don’t. Farrell and Finnemore’s point rests on the premise that hypocrisy depends on being aware of a moral compass and deliberately not using it. But that’s the thing about the new hypocrisy: Its moral compass is its hypocrisy.

Once you recognize that the issue here isn’t failing to effectively compare one’s actions to an ethical code, but rather, embracing selfish, self-serving, irrational, inconsistent and illogical behavior as an ethical code, then you get why those who practice it can’t see it. Inside the Trump hypocrisy bubble, nothing that is done by them can be judged against an external ethics. Therefore, they simply can’t possibly be a hypocrite.

For the Trumpist hypocrite, everyone else who doesn’t agree with you is the real hypocrite, but you never are. Sure, it’s absolutely batshit logic and an ethical code that lacks anything resembling ethics, but that’s how it works.

In 2017, professors Emile Bruneau, Nour Kteily and Emily Falk published a groundbreaking study on the power of revealing hypocrisy. Studying how communities commonly resort to collective blame after mass violence — like when individuals blame all Muslims for acts of mass violence committed by a small group of Muslims — they tested a range of interventions that could be used to disrupt that habit. What they found was that showing individuals that it was hypocritical to blame all Muslims for the acts of a few, when they don’t blame all Christians for the acts of a few, was a highly effective tactic.

The catch, though, was that the study wasn’t looking at Trumpist hypocrisy but hypocrisy in general. What is important to note, though, from the study, is that for the average person, it is possible to become aware of one’s hypocrisy and alter one’s beliefs. That simply isn’t true in Trumpland.

Sharat notes that one of the core problems with Trumpist hypocrisy is the fact that calling it out just doesn’t make any difference. He points to a piece in the philosophy and politics blog, Vim, that argues that the reason why calling out Trumpist hypocrisy doesn’t matter is because “charging a fascist with hypocrisy is especially pointless.” This is so because fascism requires that exposing its inconsistencies and incoherence has no effect on its adherents. Whether we want to use the F-word to describe Trumpist hypocrites or not, we do have to agree that calling it out has made absolutely no difference whatsoever to its grasp on American society.

If you have any doubts, check out the work of Jordan Klepper, who has done brilliant work satirizing the absurdity of Trumpist hypocrisy. His recurring segment for “The Daily Show with Trevor Noah” — “Jordan Klepper Fingers the Pulse” — has him out in the field interviewing Trump supporters and literally repeating their hypocrisy back at them. In every case, the interviewee hears Klepper ironically explain their hypocrisy. They then respond by unironically repeating it back to him. The contrast between Klepper cleverly exposing the hypocrisy and the hypocrite happily and obliviously owning it is stunning. As one viewer quips, “This would be so much funnier if it wasn’t so existentially terrifying.”

When you think about it, Trumpism doesn’t just practice hypocrisy — it needs it. How else do you explain defending democracy by literally trying to destroy it? Whether attacking pizza or the vice president, this is a politics grounded in unethical inconsistencies and immoral irrationality.

Hypocrisy has now become the signature feature of Trumpian politics. In fact, every single party platform is rife with it. There is literally nothing else.

But it’s worse than that. Because Trumpist hypocrisy has also overtaken most anti-Trump politics as well. In race after race this primary season, non-Trumpy candidates have literally defined themselves over and against Trumpist hypocrisy to the detriment of offering alternative policy platforms.

It’s not entirely clear how we escape the vicious cycle of constantly needing to respond to the latest hypocritical move of the Trump camp. It isn’t wise to ignore it, but it’s also problematic to let it take up the whole room. It sparks legitimate outrage but also sucks the air out of productive political engagement. And given the fact that signaling it isn’t going to affect those who practice it, giving it too much energy isn’t tipping any political scales.

It may well be that the most effective challenge to Trumpian hypocrisy comes from satire, like the Klepper segments highlighted above, since satire’s creative use of irony is uniquely suited to revealing ironic behaviors. In one excellent example, Trevor Noah offered a highly effective takedown of Trumpist media when he ran tape of Fox News covering Hillary Clinton, but paired it with footage of Trump.

There is a real benefit to allowing comedians to be the ones to skewer the hypocrites. They are experts in irony and they know the difference between the kind of inconsistency that sparks critique while getting a laugh and the kind that makes no sense. Even more important, they get that the best challenge to weaponized hypocrisy may well be to mock it. Since if there is one thing Trumpist hypocrites are worse at than recognizing their own hypocrisy, it is taking a joke. And that’s pretty funny.

Want a daily wrap-up of all the news and commentary Salon has to offer? Subscribe to our morning newsletter, Crash Course.

about politics, irony and satire: