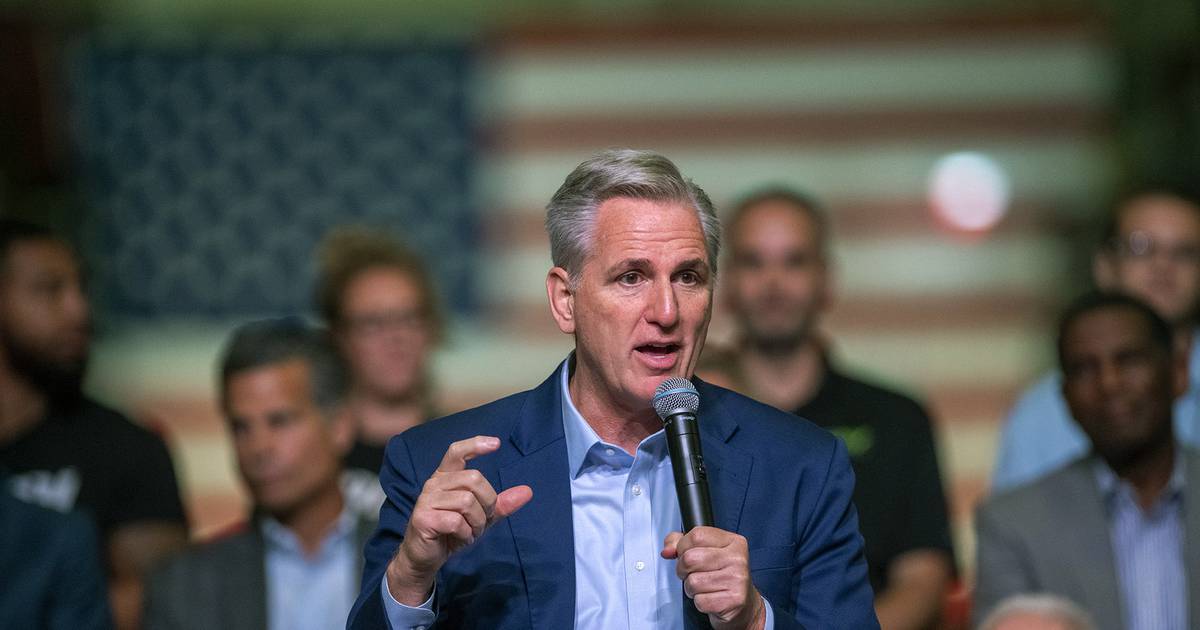 MONONGAHELA, Pa. (AP) — House Republican leader Kevin McCarthy on Friday confronted President Joe Biden and the Democratic majority in Congress with a conservative midterm election agenda filled with Trump-like promises, working not only to win over voters but to hold together the uneasy coalition of his own party that has struggled to govern.

McCarthy, who is poised to seize the speaker’s gavel if Republicans take control of the House in the fall, never once mentioned the former president. Instead, the GOP leader traveled to battleground Pennsylvania hoping to replicate the strategy that former Speaker Newt Gingrich of Georgia used to spark voter enthusiasm and gain a majority in 1994.

“What the ‘Commitment’ is, it’s a plan for a new direction,” McCarthy said at a manufacturing facility in a historic building along the Monongahela River.

The House GOP’s “Commitment to America” gives a nod to the earlier era but updates it in the age of Donald Trump, with economic, border security and social policies to rouse the former president’s deep well of supporters in sometimes-overlooked regions like this rusty landscape and rolling farmland outside Pittsburgh.

Slim enough to fit on a “pocket card,” which McCarthy pulled from his suitcoat, the agenda uses broad strokes — “A Future That’s Built on Freedom” — supplemented by more detailed proposals on energy, security and an end to liberal social policies, particularly in schooling.

President Joe Biden hit back quickly in a speech to the National Education Association.

He dismissed McCarthy’s agenda as “a thin series of policy goals with little or no detail.” But he provided his own details in urging support for Democrats in the midterm elections.

“If Republicans win control of the Congress, abortion will be banned,” Biden said. He also criticized other GOP lawmakers for proposals requiring reauthorization votes for Social Security and Medicare and opposing gun control laws and efforts to lower prescription drug costs.

“In 46 days, Americans are going to face a choice,” he said. “We have a real alternative here.”

In Pennsylvania, McCarthy said that if Republicans win the House, the first bill next year will be to repeal funding approved by Democrats to bolster the Internal Revenue Service with more employees.

On Friday, he stood with a wide cross-section of lawmakers — from far-right Rep. Marjorie Taylor Greene, R-Ga., to less extreme GOP members of Congress — offering a portrait of unity despite the wide range of views that make up the House minority — and the Republican Party nationally.

While Republicans and Trump did pass tax cuts into law, the GOP’s last big campaign promise, repealing and replacing the Affordable Care Act, also known as “Obamacare,” collapsed in failure. Republican speakers, including Gingrich, John Boehner and Paul Ryan, have been forced from office or have chosen early retirement, often ground down by party infighting.

A key architect of the Republican tea party takeover in 2010, the California Republican personally recruited the newcomers to Congress — many who had never served in public office and are now long gone. McCarthy was an early Trump endorser and has remained close to the former president, relying on Trump’s high-profile endorsements to propel GOP candidates for Congress. He abandoned an earlier bid to become speaker when support from House colleagues drifted.

Conservative Republicans complain privately that McCarthy isn’t leaning hard enough into their priorities, as he tries to appeal to a broader swath of voters and hold the party together.

It’s notable that McCarthy alone has proposed a plan if Republicans win control of the House chamber. In the Senate, Republican leader Mitch McConnell has declined to put forward an agenda, preferring to simply run against Biden and Democrats in the midterm election.

“Kevin’s done a very good job of being in position to become the speaker. And then the question is, what do you do with that? Schlapp said. “This helps as a roadmap.”