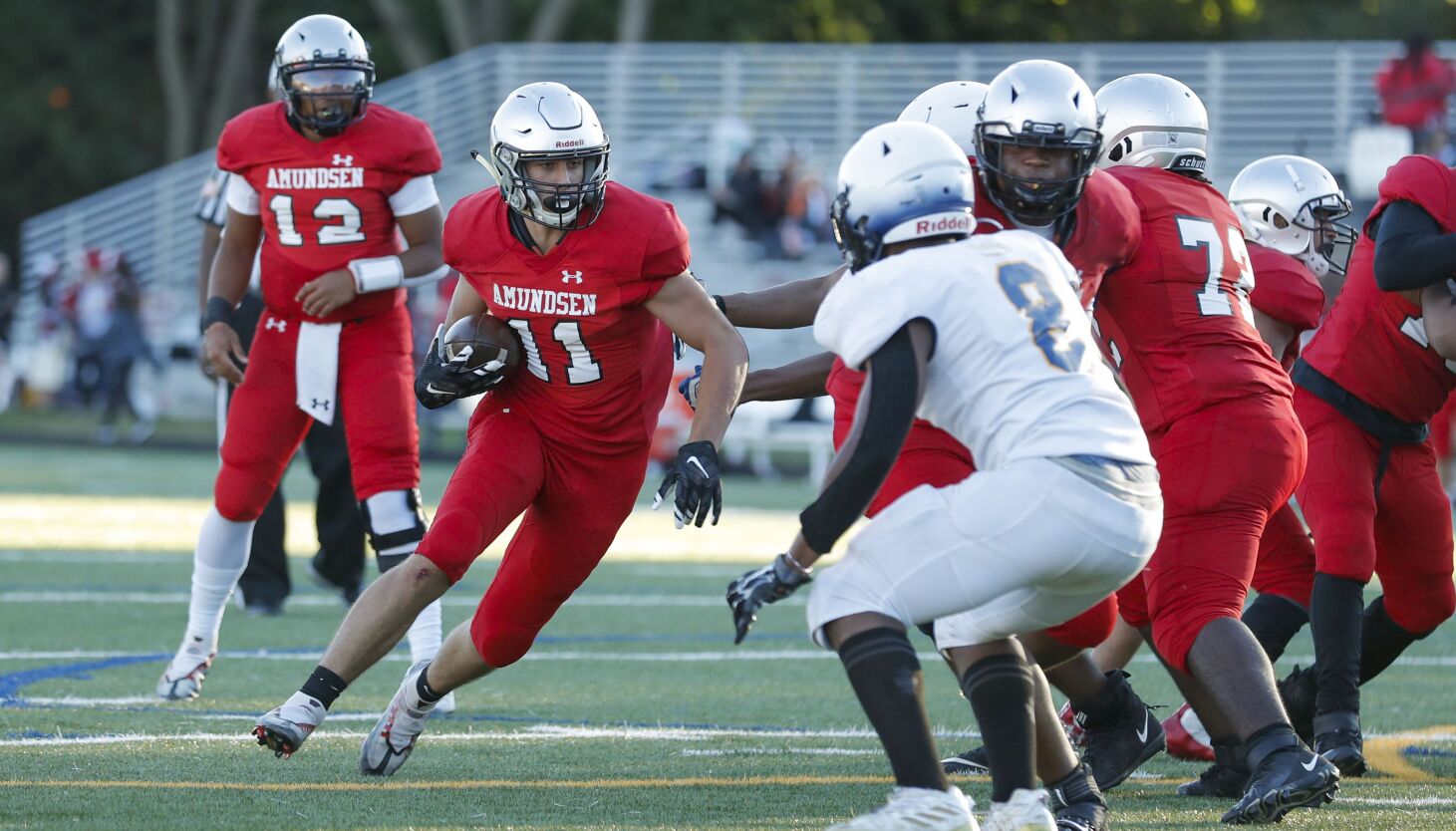 Amundsen is on the rise. That’s the consensus around the city. The North Side school was overshadowed academically and athletically by several rivals over the past couple of decades but that is changing.

The Vikings’ football team has mirrored the school’s overall progress. Coach Nick Olson’s program has qualified for the Illinois High School Association state playoffs for the past three seasons.

Amundsen was 5-5 in 2018-19, then 7-2 in 2019-20 and 8-2 last season. The Vikings haven’t managed to win a state playoff game yet, but every program has to start somewhere. Those three state appearances, the first in school history, have changed the team’s focus.

“We need to get better as a team and we need to get in the weight room,” Olson said. “The kids did that the last six months. The got right to work to get bigger and stronger and faster. That’s what separated us from Crystal Lake Central in that playoff game last year.”

Amundsen dominated Sullivan 42-0 on Thursday at Winnemac Park. The Vikings (3-2, 3-0 Red-North Central) have a star in wide receiver Adam Muench.

The 6-2, 200-pound senior had five receptions for 124 yards and four touchdowns. The second touchdown was the most spectacular. Muench made a leaping one-handed grab and then ran past or through nearly every player on Sullivan’s defense for a 55-yard TD.

“The kid catches everything,” Olson said. “I’m baffled that he doesn’t have offers pouring in. He’s super coachable and I think he leads the state with 18 or 19 receiving touchdowns. [Quarterback Chris Clark] trusts him and knows that he will make a play every time we need it.”

Muench also caught touchdown passes from Clark of six, 38 and 18 yards. Clark was 9-for-16 passing for 196 yards with four touchdowns and no interceptions.

“We are playing on a whole different level this season,” Muench said. “We have some young dogs on the line and a new quarterback has made a big difference.”

Clark missed all of last year with an injury. He’s forged a solid connection with Muench this season.

“Every year I’ve seen the spirit grow and change in the school,” Clark said. “Everybody wants to be here and come to games. It’s a fun and safe environment and I love it. I’m glad I chose Amundsen.”

“We just had to play physical and fill the gaps,” Garfias said. “As long as we do that and don’t make mistakes we will have a good day.”

The Tigers advanced to the state playoffs in Class 4A last season, but find themselves facing much larger schools in the regular season. Sullivan has fewer than 700 students.

“It’s kind of crazy but I’m all about no excuses,” Sullivan coach Calvin Clark said. “We are going up against schools double, triple and quadruple our size but at the end of the day we have to play ball. It’s an honor to be the only Class 4A school on this side of the town. We’ve been to the state playoffs four years in a row.”