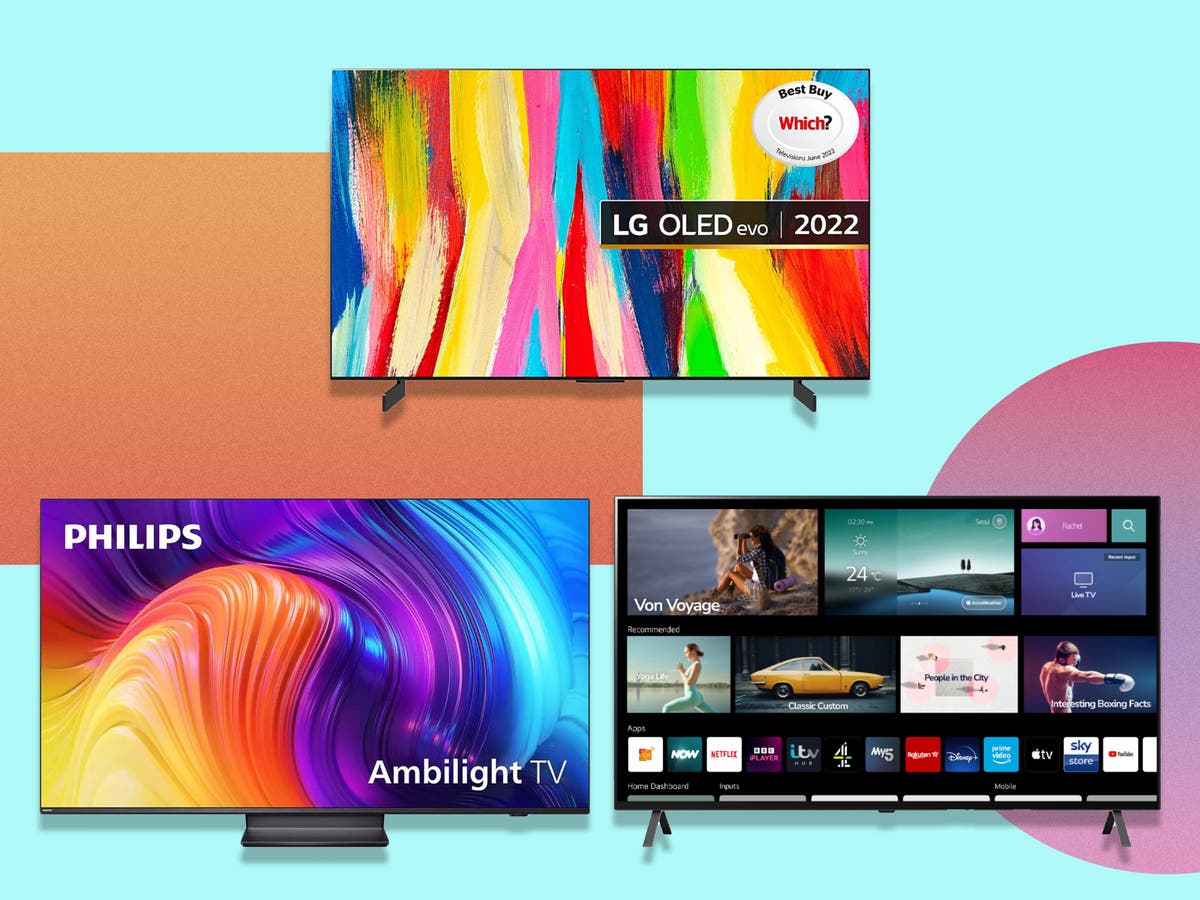 Looking for a cheap telly? Black Friday is generally the best time of year to find a good deal on a TV, with Sony, LG, Panasonic and Samsung cutting prices on their latest 4K and OLED sets. Television prices fluctuate massively throughout the year, and because Black Friday has grown to become such a giant shopping event, manufacturers are on a mission to lure shoppers in with discounts that look good on paper, but aren’t necessarily great deals.

That’s why we’re sieving through the Black Friday TV deals to filter out the rubbish and show you actual discounts on televisions we’ve tested and can recommend. A cornerstone of the Black Friday sales bonanza, televisions are heavily discounted throughout the shopping event, with screens of all sizes from brands such as Samsung, Sony and LG all having their prices cut.

We’ve organised our Black Friday TV deals by screen size, to make it easier to find a telly that fits in your living space. If you see a TV deal you like the look of in a different size, it’s worth clicking through and seeing if a similar discount is available on the size you want. Televisions are measured diagonally, from one corner to another. Always measure up your space before you buy. You can return a TV that doesn’t fit, but it’s what we in the business call “a giant faff”.

And don’t forget, Black Friday isn’t just about televisions. The sales event sees discounts on laptops, gaming, tech, mattresses, home and kitchen appliances, beauty products, fashion and much more. As always, the IndyBest team is bringing you the very latest news on the best Black Friday deals we spot, including money off Amazon and Apple devices, cordless vacuum cleaners and energy efficient appliances like air fryers and heated clothes airers too.

There’s only a small £10 saving on this 32in Hisense TV, but it’s one of the cheapest deals you’ll find this Black Friday. It has basic specs and a 720p resolution display (that’s less than full HD, nevermind 4K) but offers decent enough picture quality on a budget. Compatible with a decent selection of streaming apps – the TV runs on the Vidaa OS – it makes a great TV for a kitchen or bedroom.

You honestly don’t get 4K televisions much cheaper than this. Certainly not decent ones like the Hisense 43A6GTUK, which supports Dolby Vision HDR, Dolby Atmos sound, and 120Hz refresh rates for console and PC gaming. What’s the catch? Well, it’s an LCD panel display, so you won’t get the rich IMAX-style contrast of TVs costing three to four times as much. But unless you’re kitting out a Tony Soprano-style home cinema system, or are kept up at night thinking about “nits” and “contrast ratios”, we challenge you to spot the difference. This is a bargain 4K television and it looks great.

Launched earlier this year, the LG C2 is one of our favourite TVs and offers the best picture quality you’ll find in the 48in and below category. This is a vivid 4K set with Dolby Vision HDR and Atmos sound. Xbox, PlayStation and PC gamers will appreciate the silky-smooth 120Hz variable refresh rate and 0.1ms response time, while the self-lit OLED pixels and image processing allow for a rich contrast between dark and light parts of the scene. There are discounts across most available sizes, but they’re not evenly applied.

This 4K OLED television from Philips has £130 off at Currys until Friday. That’s a decent saving on an already cheap 50in set with cinematic Dolby vision and sound system. Like lots of Philips TVs, it comes with ambilight technology, a flashy setup that uses LED backlights to illuminate the wall with the same colours you’re seeing on screen. It’s a weirdly immersive effect, especially when watching movies in the dark.

One of the better Black Friday deals we’ve spied at AO this morning is on this 50in 4K Samsung TV, which was already great value at £529 but is now a steal at £399. The TV is a cheaper than rivals because it uses the more inexpensive LED technology, which is a smidge less vibrant than OLED or QLED panels.

The top TV deal we’ve spotted ahead of Black Friday is on this Sony Bravia XR55A80J. It’s an excellent 55in 4K OLED screen and features the Google TV interface, Dolby Atmos sound and Sony’s “acoustic surface audio technology”, which turns the entire screen into a speaker. We’d still recommend a separate soundbar if you can get one. The TV is down to £999 from £1,399 in the Black Friday sale.

Here’s a £70 saving on a 55in smart TV from LG, one of the most highly reviewed TV brands you’ll find. This model strikes the perfect balance between picture quality and affordability, and it was already one of our most recommended buys before the discount. LCD panels might lack the rich contrast of more-expensive TVs in the range, but the suite of streaming apps, the smooth interface, the built-in FreeView and effortless connectivity make this a great choice for pretty much every living room.

If you’re looking for a big-screen TV on a budget, this is a good option from TCL. It’s a 55in QLED television with a 4K resolution, plus support for Dolby Vision, HDR 10+ and Dolby Atmos. There’s also a gaming mode, wifi for all of your favourite streaming apps, and voice control with support for Amazon Alexa.

This deal saves £300 on a 55in 4K smart TV from Samsung. Reduced from £799 to £499, this current-generation Samsung screen was new for 2022 and features integration with the company’s SmartThings smart home system, plus it comes with a solar-powered remote that never needs new batteries.

This is a great price for an OLED TV of this size, especially one launched in 2022. The OLED panel uses per-pixel lighting rather than a flat backlight to produce unbeatable contrast and colour reproduction compared to a standard LCD or LED screen. In dark rooms the effect is especially noticeable, making this set ideal for cinema viewing at home.

This Samsung TV currently has an impressive 36 per cent discount, saving you more than £400. Promising to deliver a “lifelike, vivid picture”, whether you’re catching up on the latest Marvel release or your favourite boxset. It’s designed with adaptive audio too, which will automatically adjust the sound, depending on what you’re watching, for an all-round immersive experience.

Black Friday is today. The annual sales event always takes place the day after the US Thanksgiving holiday. This falls on the final Thursday of November, which means that this year, Black Friday fell on 25 November.

Although the event used to last just a single day, Black Friday has grown to take over the entire weekend, spilling over into Cyber Monday too. And some retailers like to jump the gun, starting their Black Friday sales a week, or in some cases even an entire month, that’s what we saw from Amazon, Currys, Argos and AO last year, which all started their 2021 Black Friday sales well before the big day itself.

Back when Black Friday was an entirely offline affair, with shops opening their doors to crowds of eager shoppers at the stroke of midnight, Cyber Monday was the online equivalent.

Now, though, while retailers sometimes change the name of their sale when the new week begins, Cyber Monday is essentially more of the same. You might see some unique deals that day, but there’s every chance some deals will continue right across the weekend and into the Monday, which for this year is 28 November.

For the latest home discounts, and more offers, try the links below:

Have you snapped up any Black Friday deals or have tips and tricks for shopping the sales? We want to read your reviews and see photos and videos of products you love, being tested by real people.

Email indybestcommunity@independent.co.uk or use #IndyCommunity on your social posts for a chance to be featured and help fellow readers!

Looking to benefit from a huge range of discounts? Head to the IndyBest deals section

Best Black Friday gaming deals – Xbox, PlayStation or Nintendo? Our experts are on hand to help find you the top discounts

Best Black Friday clothing deals – whether it’s trainers or a coat, treat yourself to some new wardrobe essentials

Best Black Friday air fryer deals – from Ninja to Tefal, these discounts are anything but hot air

Best Black Friday microwave deals – whether it’s a solo, grill or combination model, snap up one of these appliances

Best Argos Black Friday deals – find discounts on everything from kids to homeware, fitness and DIY